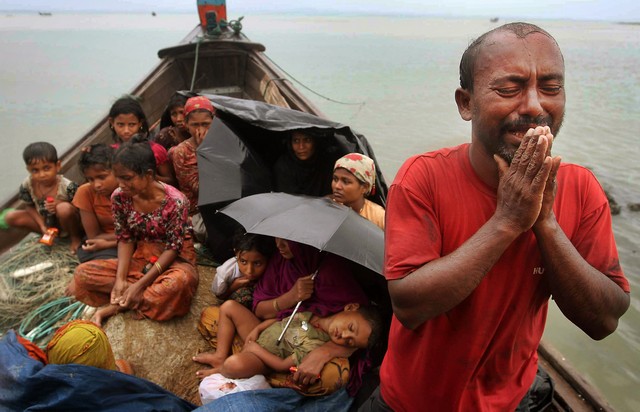 The Rohingyas — or at least some Rohingyas — are now being projected as terrorists, as “Jihadists” out to kill Myanmar soldiers and civilians. Myanmar leaders including Aung San Suu Kyi have spoken along these lines.

This view of the Rohingyas is being propagated by the Myanmar government with greater zeal since a small armed group called the Arakan Rohingya Salvation Army ( ARSA) attacked security forces on 9 October 2016. These attacks have continued in recent weeks. In this new wave of violence it is alleged that 12 security personnel were killed while the Myanmar military and border police have killed 77 Rohingya Muslims.

The way Aung San Suu Kyi and her government colleagues have framed the clashes ignores the brutal massacres committed by the military over a long period of time. The oppression and persecution of the Rohingyas by the State and other forces has been thoroughly documented by the United Nations Human Rights Council and other independent human rights groups. It is well-known that as a community the Rohingyas were stripped of Myanmar citizenship in 1982, deprived of basic human rights, tortured, imprisoned, and forced to flee their home province of Rakhine. This is why there are tens of thousands of Rohingyas living in squalid conditions in Bangladesh or struggling to survive in a number of countries from Malaysia to Saudi Arabia. They have been described by the UN itself as one of the world’s most persecuted minorities. Simply put, the Rohingyas are the victims of a slow genocide, to quote Nobel Laureate Professor Amartya Sen.

To condemn the violence of a miniscule fraction of the Rohingyas without taking into account their massive marginalisation and severe oppression is a travesty of truth and justice. It is extreme desperation and hopelessness that has forced some of them to resort to violence. Of course, violence is not the solution. It will not help to restore the rights of the Rohingyas, especially their right to citizenship.

Our concern is that the violence will escalate. The signs are already there. Given the underlying religious connotations of the conflict — though the conflict itself is not rooted in religion per se – it is not inconceivable that the violence will spread beyond Myanmar’s borders and engulf Muslim and Buddhist communities in other parts of Southeast Asia. This would be catastrophic for ASEAN, a regional grouping in which 42% of the population is Muslim and another 40% is Buddhist.

Finding workable solutions to the Myanmar – Rohingya conflict is therefore of utmost importance. It is in this regard that the ‘Final Report of the Advisory Commission on Rakhine State’ under the chairmanship of former UN Secretary-General, Kofi Annan, deserves the urgent attention of all stakeholders. The Report announced in August 2017 calls for a review of the 1982 citizenship law and notes that “Myanmar harbours the largest community of stateless people in the world.” It urges the government to abolish distinctions between different types of citizens.

Other recommendations pertain to reduction of the poverty rate in Rakhine state which is 78%, improving the socio-economic condition of the people, enhancing access to health services and education, ensuring freedom of movement and encouraging people’s participation and representation. Though the Report is worded with a great deal of caution and diplomacy, it does send an unambiguous message to the powers-that-be in Myanmar that the status quo cannot be allowed to persist and that change has to take place. That message is significant considering that the Commission was actually initiated by the government.

Will the government take heed? So far there is no indication that it will respond positively to the Commission’s recommendations. This is not surprising. It is the harsh authoritarianism of the government embodied in the power of the military that is primarily responsible for the targeting of the Rohingya as the “ethnic other.” This is what has resulted in the genocide that we are witnessing today.

Even if the Myanmar government does not act of its own volition, the Kofi Annan Report can be used to persuade other governments to pressurise Myanmar to act. Apart from ASEAN governments, special efforts should be made by civil society groups and the media to convince Beijing, Tokyo, New Delhi, Islamabad and Washington and London that they demand that the Myanmar government protects all its citizens without discrimination. If it fails to do so, these capitals should review their economic and/or military ties with Naypyidaw.

It is with the aim of persuading the leadership in Naypyidaw to change its behaviour that the Permanent People’s Tribunal (PPT) is holding its concluding session in Kuala Lumpur on the treatment of the Rohingyas, Kachins and other minorities in Myanmar from the 18th to the 22nd of September 2017. As more and more voices plead for justice and compassion on behalf of the oppressed who knows they may eventually pierce the walls of Naypyidaw.

Dr. Chandra Muzaffar is the President of the International Movement for a Just World (JUST).