A Nonviolent Strategy To End War 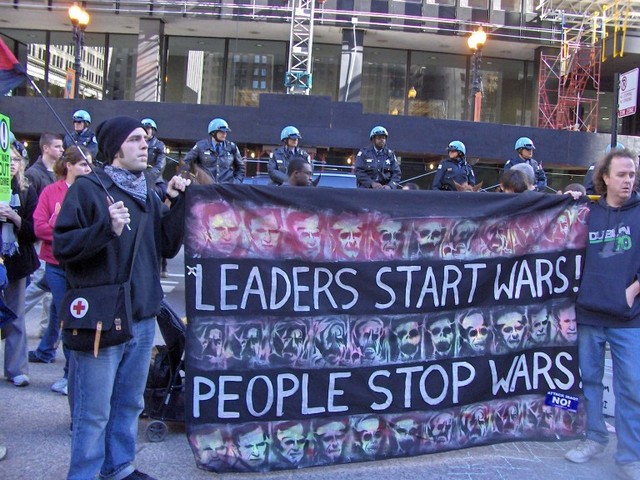 There is a long history of anti-war and peace activism. Much of this activism has focused on ending a particular war. Some of this activism has been directed at ending a particular aspect of war, such as the use of a type of weapon. Some of it has aimed to prevent a type of war, such as ‘aggressive war’ or nuclear war. For those activists who regard war as the scourge of human existence, however, ‘the holy grail’ has always been much deeper: to end war.

There is an important reason why those of us in the last category have not, so far, succeeded. In essence, this is because, whatever their merits, the analyses and strategies we have been using have been inadequate. This is, of course, only a friendly criticism of our efforts, including my own. I am also not suggesting that the task will be easy, even with a sound analysis and comprehensive strategy. But it will be far more likely.

Given my own preoccupation with human violence, of which I see war as a primary subset, I have spent a great deal of time researching why violence occurs in the first place – see ‘Why Violence?’ http://tinyurl.com/whyviolence and ‘Fearless Psychology and Fearful Psychology: Principles and Practice’. http://anitamckone.wordpress.com/articles-2/fearless-and-fearful-psychology/ – and by taking or teaching strategic nonviolent action in response to many of its manifestations.

Moreover, given that I like to succeed when I work for positive change in this world, I pay a great deal of attention to strategy. In fact, I have written extensively on this subject after researching the ideas of the greatest strategic theorists and strategists in history. If you are really keen, you can read about this in ‘The Strategy of Nonviolent Defense: A Gandhian Approach’. http://www.sunypress.edu/p-2176-the-strategy-of-nonviolent-defe.aspx

However, because I know that most people aren’t too interested in scholarly works and that nonviolent activists have plenty of worthwhile things to do with their time, I have recently been putting the essence of the information in the book onto two websites so that the strategic thinking is presented simply and is readily available.

One of the outcomes I would like to achieve through these websites is to involve interested peace and anti-war activists from around the world in finalizing the development of a comprehensive nonviolent strategy to end war and to then work with them to implement it.

Consequently, I have been developing this nonviolent strategy to end war and I invite you to check it out and to suggest improvements. You can see it on the Nonviolent Campaign Strategy website. https://nonviolentstrategy.wordpress.com/

If you are interested in being involved in what will be a long and difficult campaign, I would love to hear from you.

You might also be interested in signing the online pledge of ‘The People’s Charter to Create a Nonviolent World’ http://thepeoplesnonviolencecharter.wordpress.com where the names of many nonviolent activists who will work on this campaign are already listed.

Ending war is not impossible. But it is going to take a phenomenal amount of intelligent strategic effort, courage and time. Whether we have that time is the only variable beyond our control.

Robert J. Burrowes has a lifetime commitment to understanding and ending human violence. He has done extensive research since 1966 in an effort to understand why human beings are violent and has been a nonviolent activist since 1981. He is the author of ‘Why Violence?’