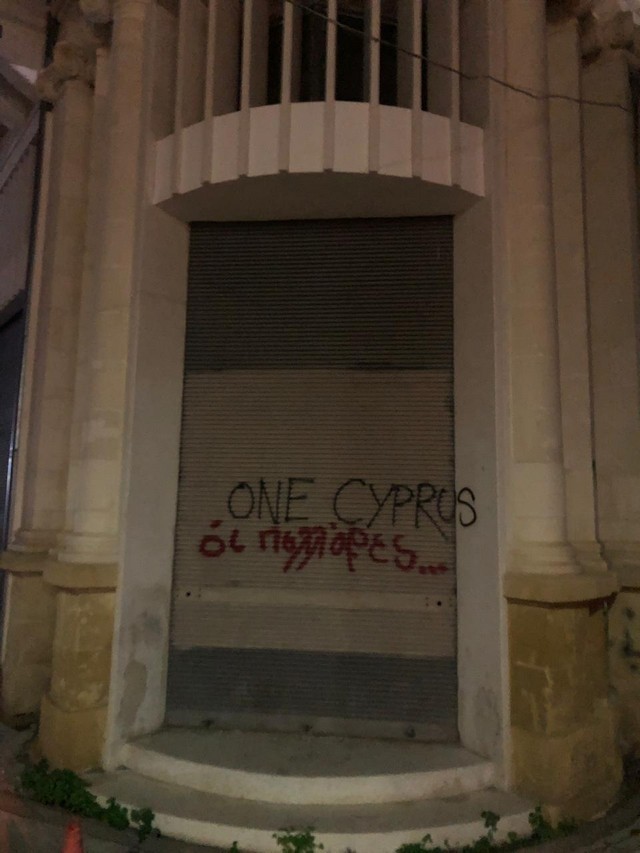 Believe it or not, but not long ago, Cyprus used to be the only country in the European Union that was governed by a Communist Party. And it was not really too long ago – between 2008 and 2013.

Also, relatively recently, unification of the Republic of Cyprus and the Turkish administered northern part of the island, appeared to be achievable.

And when Cyprus, like Greece, almost collapsed financially, it was Russia which offered to bail it out (before the EU did all it could to prevent this from happening).

The city of Nicosia is still divided, with the Greek Cypriot and the Turkish immigration check-points located right in the middle of an old town. Graffiti painted in‘no man’s land’ demand an immediate end to the conflict: ‘One country; one nation solution’.

The crossing is busy.And to make it all somehow more colorful, perhaps, there is a huge white Pitbull, phlegmatically hanging around the border area. It does not bark; it is just there. Nobody knows whether he belongs to the Turkish or the Greek side, but it appears that he spends more time with the Turks, as, I suppose, they feed him better.

The Greek-speaking side of Nicosia looks like a slightly run-down EU provincial town. On their flank, Turks are smoking shisha (traditional Middle Eastern waterpipe), and their cafes appear to be more traditional, and the old architecture more elegant. In the southern part, freshly brewed coffee is called ‘Greek’, while a few meters north, you have to order ‘Turkish’, or at least ‘Arabic coffee’. Needless to say, you get the same stuff on both sides.

Otherwise, it is one island, one history and one sad and unnecessary partition.

The division of the nation is not the only madness here. Before you get used to the idea, you may go mental, finding out that there are two British administered territories still engraved into the island.

If you drive around, you will never notice that you are actually leaving Cyprus, and entering the U.K.Some car license plates are different to those regular Cypriot ones, but that’s about it.

You cross an invisible line, and you are in the UK; historically the most aggressive (militarily and ideologically) nation on the face of the earth.

You drive through some agricultural fields, but soon you see something very eerie all around the road: a few kilometers after passing the historic Crusader’s Kolossi Castle, there is an ocean of masts of different heights and shapes, as well as concrete, fortified military installations.The masts are ‘decorated’ with strange looking wires. It all looks like some old Sci-Fi movie.

Of course, if you come ‘prepared’, you know what you are facing: tremendous installations of the BBC propaganda apparatus aimed at destabilizing and indoctrinating the Middle East. But that is not all. This entire enclave – ‘Sovereign Base Areas of Akrotiri’(as well as Dhekelia a few dozens of miles to the east) -is here mostly in order to spy on the ‘neighborhood’ of the Middle East. While London is some 4 hours flight away, Syria is just a short distance across the water, and so is Lebanon.

Further south, after you leave the propaganda and spy installations behind, is a small village of Akrotiri; a typical picturesque Cypriot charming settlement, with an old church, narrow streets and humble local cafes.It sits on top of the hill. But you are, actually, inside the U.K. From here, you can see the blue sea, a salt lake and the city of Limassol; but you are on British turf. How come? Simple: after Cyprus achieved independence from the British Empire, in 1960, the Brits ‘were concerned’ that they could lose control over their military bases in Cyprus, and at least partially, influence over the Middle East.As this being unimaginable to the British imperialist mind, the U.K. arm-twisted the Cypriots into this bizarre arrangement which holds to this day.

One more kilometer further south, and you hit the wall and a gate, decorated with threatening warnings. You are at the perimeter of the RAF Akrotiri base. From here, since December 2015, the RAF is carrying out illegal (according to international law) airstrikes against the sovereign Syrian Arab Republic.

According to Jeffrey Richelson & Desmond Ball, The Ties the Bind: Intelligence Cooperation between the UKUSA Countries, (Unwin Hyman, Boston/London and others, 1990, p.194 note 145):

“As of 2010, around 3,000 troops of British Forces Cyprus are based at Akrotiri and Dhekelia. Ayios Nikolaos Station, in the ESBA, is an ELINT (electronic intelligence) listening station of the UKUSA Agreement intelligence network.”

That was then, but now things are getting even deadlier. Practically, the U.K. is at war with Syria. Many in Cyprus are deeply concerned that Syria could retaliate, sending missiles against the RAF bases, from which it is being bombed (legally, independent Syria has the full right to defend itself against the attacks from abroad). Such retaliation could endanger the lives of the inhabitants of Cyprus.

There have been protests and demands for the British forces to return to Cyprus both of the ‘sovereign bases’, but the U.K. shows no interest in ceding what it controls.

As early as in 2008, former left-wing President Demetris Christofias (who was also the General Secretary of AKEL, the Communist Party of Cyprus) tried to remove all British forces from the island, calling them a”colonial bloodstain”.However, he did not succeed, and in 2013 he decided to step down and not to seek re-election.

Dhekelia Base is carved into the eastern part of Cyprus, bizarrely encircling both Turkish-controlled and Greek-speaking villages.

In the past, the Cypriots fought against the British presence. Nowadays, in the era of omnipresent surveillance, sabotages and resistance had been replaced by toothless protests. Still, hundreds of local people have been detained, demanding the departure of British troops from the island.

Cyprus is still divided, although reunification talks began, once again, in 2015. Now it is possible to walk between the Republic of Cyprus and Northern Cyprus (controlled by Turkey).

It was not always this way. As Papadakis Yiannis wrote:

“On 15 July 1974, the Greek military junta under Dimitrios Ioannides carried out a coup d’état in Cyprus, to unite the island with Greece.”

Thousands of Turkish residents were displaced, many killed. Turkey invaded and the island got divided. But inter-cultural violence dated even further back than 1974. The history can be felt on every corner of Nicosia, and in many villages of the island. Northern Cyprus was never recognized by any other country except Turkey, but the division is still there. There are still entire de-populated towns that used to belong to the displaced Turkish and Greek inhabitants.

One of the eeriest is Kofinou, in the south of the island, which suffered on at least two occasions, unprecedented ethnic violence, which could be defined as ‘cleansing’. Once inhabited mainly by the Turkish Cypriots, Kofinou is now a ghost town, dotted with collapsed houses and agricultural structures, with foreign guest workers and farm animals living in appalling conditions.

Cyprus has two faces. It is proud to be one of the famous European tourist destinations. It is an EU member.

Simultaneously, it is a symbol of division.

Border fences between the Republic of Cyprus and Northern Cyprus are scarring its beautiful countryside. Deadly British military installations, theair force bases, as well as propaganda warfare and disinformation campaigns are brutalizing, physically and morally, almost the entire Middle East.

Here, in Cyprus, European and Russian tourists coexist, uneasily. The ideological war between the West and the rest of the planet is clearly felt in Pathos and other historic areas of the island.

Some British residents (around 50,000 of them), as well as countless British tourists, often behave insultingly towards the generally humble Russian visitors. Here, the British Empire still appears to be ‘in charge’.

In the port of Pathos, I passed by an elderly Russian couple, who seemed to be simply admiring an old water castle. A British couplewas passing by, then looked back and forged sarcastic, rude grimaces: “Those Russians,” uttered the man. This was not the only instance when I witnessed this sort of behavior.

In Cyprus, I drove exactly 750 kilometers, all around the island, trying to understand and define its present position, and its role in the ‘area’ and in the world.

I hoped to find reminiscences of at least some revolutionary spirit of the Communist (AKEL) government. But I almost exclusively found pragmatism, so typical for basically all European Union countries.Only questions like this were common: ‘Would Brexit be good or bad for Cyprus?’ Or: ‘Would the bombing of Syria be dangerous for the citizens of Cyprus?’

Symbolically, near the village of Kofinou, destroyed by the inter-cultural violence several decades ago, I found a tough-looking refugee camp, built mainly for the immigrants coming from the destabilized Middle East. It looks like a concentration camp. Locals call i

As I was driving around the area, I spotted, just a few kilometers from the camp, in front of an eerie and semi-abandoned farm, a huge goat.It was on its side; dying, in agony, in the middle of the road.

Cyprus has become a divided island with some hedonistic resorts, but also with terribly marginalized communities, located all over its territory.

One could easily conclude: this former British colony is still allowing, for a fee, the tremendous presence of the British/NATO military forces, as well as various spy facilities and propaganda outlets. RAF Tornado jet fighters are presently flying their ‘missions’ against Syria. Missiles are being fired from Akrotiri. People fleeing from the destroyed countries of the Middle East, are then detained in Cyprus, like criminals, behind barbed wire.

In the meantime, the people of Cyprus are calculating, whether all this is truly feasible, or not; whether to be an outpost of the empire is a good business, for as long as it pays, they will do very little to change the situation. Despite of its complex past and present, as well as its proximity to the Middle East, Cyprus is, after all, an integral partof Europe, and therefore of the Western empire.

Andre Vltchek is a philosopher, novelist, filmmaker and investigative journalist.