If Syria Is To Fall, Others Will Follow: The Pandora’s Box Of Federalism 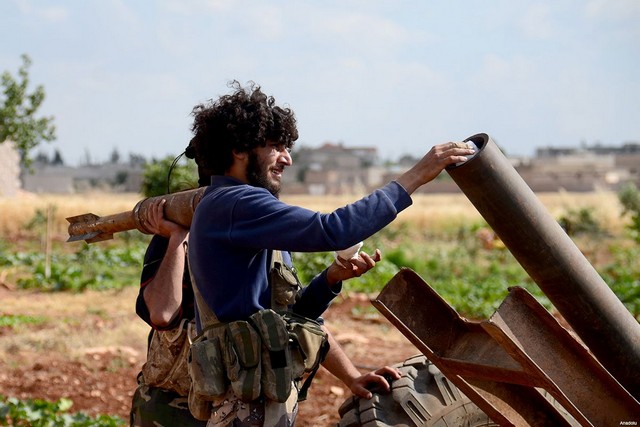 Few of the analyses offered should be taken seriously. There is little solid information as of why the Russian leader decided to end his country’s military push in Syria. The intervention, which began last September, was enough to change the direction of the war on many fronts.

However, one thing is for sure: the Russian withdrawal is reversible, as indicated by Vladimir Putin himself. “If necessary, literally within a few hours, Russia can build up its contingent in the region to a size proportionate to the situation developing there and use the entire arsenal of capabilities at our disposal,” he said at the Kremlin on March 17.

In fact, all parties involved are taking such a threat seriously, for the abrupt withdrawal has not renewed the appetite for war and does not present an opportunity for any major party in the conflict to pull out of the Geneva peace talks.

It is safe to say that after five years of war in Syria, the conflict is entering into a new phase. No, not a political resolution, but a grand political game that could divide the country into several entities, according to sectarian lines.

If that takes place, it will bode badly, not only for Syria alone, but the whole region. Division would then become the buzzword according to which all current conflicts would be expected to be settled.

While Russia’s motives behind the withdrawal are yet to be clarified, the intrinsic link between it and the current talks, in which dividing Syria into a federations have been placed on the agenda, is unmistakable.

“UN mediator, Staffan de Mistura, should be ashamed to have put ‘federalism’ on the agenda of this week’s talks on ending the Syrian war and fashioning a ‘new’ Syria,” wrote Michael Jensen in the Jordan Times. “Moscow, plus some Western powers, should also be sharply criticized for thinking of such a possibility.”

Indeed, the model is not entirely Russian. The latter managed to rebalance the conflict in favor of the government of Bashar Al-Assad, but various other parties, western and Arab, in addition to Turkey and Iran, have also managed to steer the conflict to a virtual deadlock.

With no goodwill involved, and little trust among the conflicting parties, dividing the country morphed from a far-fetched possibility to an actual one.

Therefore, it came as no surprise that, while the Russian withdrawal was still taking place, and shortly after the resumption of talks in Geneva, the Kurdish-controlled areas in Syria declared itself a federal region in the north. Of, course, the move is unconstitutional, but Syria’s violent bedlam has become the perfect opportunity for various groups to take matters into their own hands. After all, the very violent Daesh had carved a state for itself and fashioned an economy, created ministries and written new text books.

But the move by the Syrian Kurdish PYD is, in fact, more consequential. Daesh is a pariah group that is not recognized by any party in the conflict. PYD, which is considered an offshoot of the Turkey’s Kurdistan Workers’ Party (PKK), on the other hand, has much sympathy and support, from both the US and Russia.

The group was credited for intrepidly fighting Daesh, and expected political dividends for that role. However, the PYD was not invited to join the talks in Geneva.

Although their decision was seen as a retribution for being excluded from the talks, it is unlikely that the PYD made the decision without covert support from its main benefactors who have been floating the idea of federation for months.

For example, the idea was articulated by Michael O’Hanlon of the Brookings Institute in a Reuter’s op-ed last October. He called for the US to find a ‘common purpose with Russia’, while keeping in mind the ‘Bosnia model.’

More recently, during a testimony before a US Senate committee to discuss the Syria ceasefire, Secretary of State, John Kerry revealed that his country is preparing a ‘Plan B” should the ceasefire fail. It may be “too late to keep Syria as a whole, if we wait much longer,” he said.

The Russian partaking of the war may have altered the landscape of the conflict on the ground, but it also further cemented the division model.

Recent comments by Russia’s Deputy Foreign Minister, Sergei Ryabkov, that a federal model for Syria “will work to serve the task of preserving (it) as a united, secular, independent and sovereign nation,” was the Russian spin on Kerry’s remarks.

Considering the current balances of power in Syria itself and the region as a whole, it might eventually become the only feasible solution for a country torn by war and fatigued by endless deaths.

Qatar and other Gulf countries have already rejected the federalism idea, although considering the Syrian government’s latest territorial gains, their rejection might not be a pivotal factor. The Turks also find federalism problematic for it will empower its arch enemies, the Kurds, who, according to the model, will be granted their own autonomous region. The PYD announcement was a trial balloon at best, or a first step towards the division of the whole of Syria.

Considering how grisly the Syrian war has been in those past years, federalism might not strike many as a dreadful possibility, but it is. Arab countries are historically an outcome of western and foreign meddling that divided the region in accordance to strategic convenience. That ‘divide and rule’ mindset has never been vanquished, but rather strengthened under the American occupation of Iraq.

“‘Federalism’ in the context of this region is another word for division and partition. It is a curse word and a curse concept for countries in this region where sectarian and ethnic communities have been planted for centuries in the bodies of states, like raisins in a Christmas fruitcake,” Jensen elaborated.

The Arab region was divided in 1916 to resolve outstanding conflicts between Britain, France and, to a lesser extent, Russia. The proposed division in Syria follows the same logic.

But if this Pandora’s Box is to open, it is likely to find itself on the agenda of future peace talks, where Libyans and Yemenis might find themselves contending with the same possibility. Both of these countries were, at one point in the past, also divided so it is not entirely an implausible notion.

It is important that dividing the Arabs does not become the modus operandi in managing conflict, the region and its resources. Federalism does not just undermine the identity of the Syrian nation, but it also plants the seed for further conflicts between warring sects, not in Syria alone, but in the Middle East at large.

Only a united Syria can offer hope for the future. Nothing else does.

Dr. Ramzy Baroud has been writing about the Middle East for over 20 years. He is an internationally-syndicated columnist, a media consultant, an author of several books and the founder of PalestineChronicle.com. His books include ‘Searching Jenin’, ‘The Second Palestinian Intifada’ and his latest ‘My Father Was a Freedom Fighter: Gaza’s Untold Story’. His website is: www.ramzybaroud.net.

PrevPreviousBelgian Authorities Had “Precise Intelligence Warnings” Of Brussels Bombings
NextUntold Story of Syrian Coup: Who is Really Behind the Plot to Topple Assad?Next