Modi Has Awakened a Sleeping Giant 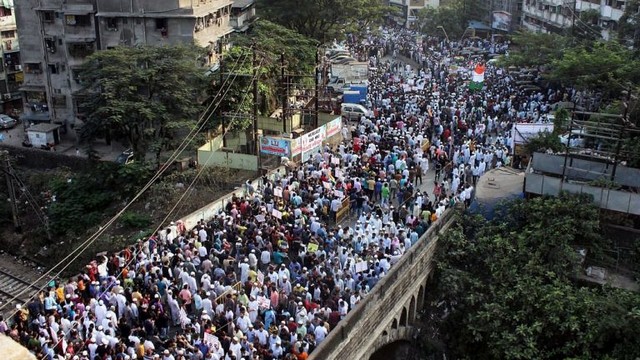 I have never felt so proud of my country in a long, long time. Led mostly by students and youth, Indians are marching in their millions across the length and breadth of the country to assert that India belongs to Muslims, as much as it does to anyone else.

Millions and millions of students from schools, colleges and university campuses as well as ordinary people across India have come out on the streets in solidarity with the students of Jamia Millia Islamia and Aligarh Muslim University. They are not just protesting against the brutal, unprecedented crackdown unleashed on the students of the two central universities earlier this week, they are also demonstrating against Narendra Modi’s new brazenly fascist and Islamophobic Citizenship law as well as the relentless targeting of Muslims under this order over the past few years.

The nationwide protests and demonstrations that rocked the country on Thursday, December 19, the Martyrs Day by the way, bringing out people on to the streets in every village and city of the country have not been seen in India in a long, long time — perhaps not since the 1974 Emergency. The protests see every section of society united in their opposition to the highhanded actions of the BJP government. As Yogendra Yadav put it, these protests are no longer about one religion or region.

It goes without saying that the majority of these students and protesters happens to be Hindu, naturally reflecting the demographic profile of the country. And they have firmly and resolutely rejected this government’s attempts to do to India’s 200 million Muslims what Hitler’s Nazis did in Germany to the Jewish minority. That is, politically isolate, disenfranchise and disempower the already marginalised Muslims, turning them into non-citizens, like Myanmar’s Rohingya, or worse, like the persecuted Jews in Nazi Germany.

After the stifling darkness and oppression of the past six years, Indians appear to be finally waking up to say enough is enough. They have been resisting and defying the tyranny of the BJP and its deadly duo.

In its hubris and sheer arrogance of power, the BJP has ended up uniting this country, reminding it of the lofty ideals and values that inspired the founding fathers of the nation and their hard-won freedom.

Modi and Shah have managed to awaken a sleeping giant of a nation, not to mention the long docile and voiceless Indian Muslims who have silently suffered over the past few years, taking every injustice and atrocity in their stride.

The BJP managed to ram through the Citizenship Amendment Bill — just as it had rammed through the Triple Talaq Bill, the dismemberment of Jammu and Kashmir — notwithstanding the fact that it does not have enough numbers in the upper house of Parliament. This was chiefly because of the coercive tactics of Modi and Shah and shameful disunity in the opposition ranks.

President Kovind dutifully signed on the dotted line, approving the legislation that openly discriminates against Muslims and strikes at the very heart of India’s secular and liberal Constitution. It appeared as if nothing stood in the way of the BJP’s agenda to turn the Gandhian democracy into a Hindu Rashtra.

Even though people in the Northeast began taking to streets in their thousands against the proposed law, viewing it as an existential threat, even as the bill was being debated in Parliament, for the rest of the country it had been business as usual.

Until our youthful heroes from Jamia Millia and Aligarh decided to rise up in defiance of this black law, provoking the now infamous and unimaginably cruel response from the thugs in uniform who report to Amit Shah.

From raining lathis and firing bullets on peacefully protesting students to molesting girls and destroying Jamia’s historical library, the Delhi Police did everything possible to terrorise and intimidate students.

Many of them sustained serious injuries and broken limbs. Across the world, students are viewed as a nation’s future. Their voices are heard by powers that be with the seriousness that they deserve.

Under this order though, everything is viewed through the twisted prism of fallacies that it has invented for itself. The Dear Leader chooses to see those protesting against the divisive policies and agenda of his government not as Indians but by the clothes they wear. In doing so, he is once again doing what the BJP does best – trying to divide this country by pitting Hindus and Muslims against each other.

The Home Minister is hardly joking when he says that by bringing in the Citizenship law and, its next logical stage, the NRC, which would cleanse India of “termites” (read Muslims) in his own words, the BJP is “correcting the historic wrongs of Partition.”

This is the real agenda of the BJP and its Parivar: 72 years after the catastrophe of Partition, divide the Hindus and Muslims all over again in the name of religion. The CAA-NRC is nothing but yet another shameless attempt to fracture this country along religious lines, portraying the BJP as the sole guardian of the Hindus.

Many of us including this writer had been under the impression that the Parivar has nearly succeeded in this mission. But, no, we couldn’t have been more wrong. The spontaneous protests in the length and breadth of this country against the Jamia and AMU crackdown and the whole injustice of the CAA and NRC prove that all is not lost. There is still hope for India.

The majority of this nation remains steadfast in its belief in the secular and plural ethos that we all inherited. It is beginning to see through the dangerous game that the BJP has been playing to perpetuate itself in power at the cost of the nation and its future and stability.

As Pavan Verma, who has revolted against his party and its president Nitish Kumar’s stand on the CAA, put it, ordinary Hindus in whose name the Parivar has been waging this relentless war on the Idea of India want no part of this perpetual strife created by the BJP. They want peace and stability and simply want to get on with their lives. This is what all Indians except the Parivar of course want. And they have clearly concluded that it is time to speak up. Enough of this regime’s perpetual fighting of phantoms at the cost of real challenges like a floundering economy and deepening unemployment crisis.

Enough of peddling hate and bigotry against minorities, Dalits and women. Enough of lynchings and rapes. Enough of the reign of terror that has brought so much shame and infamy to India. Newspapers around the world have been reporting on their front pages how the BJP is destroying the world’s largest democracy by ramming through its sectarian agenda.

The salutary act of defiance by the students of Jamia Millia, a university that was born out of India’s freedom struggle and founded by Maulana Mohammed Ali Johar, and AMU, has clearly set off a revolution, sparking a million mutinies throughout the land.

Young girls like Ayesha Renna and Ladeeda Farzana, the Jamia students who valiantly took on the might of the Orwellian state, have overnight become heroes or ‘sheroes’, as they are being called by the media, of a nation that desperately wants to return to its original noble self and its all-embracing spirit.

By rising in revolt in solidarity with JNU and AMU students, Indians have demonstrated that they remain a united nation and are not prepared to be divided as Hindus and Muslims all over again.