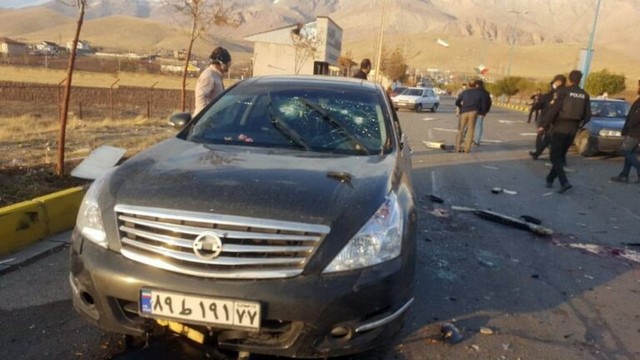 6 Dec 2020 – This is an interview published in the Tehran Times on 2 Dec 2020 to questions posed by Zahra Mirzafarjouyan.

Richard Falk says the assassination of Mohsen Fakhrizadeh cannot be legally, morally, or politically justified by any acceptable theory justifying the use of international force, and has very negative implications as an international precedent confirming prior political assassinations of nuclear scientists and opponents in recent years by drone strikes and other methods of attack as in this instance.

Top Iranian nuclear and defence scientist ‘Dr. Mohsen Fakhrizadeh’, who headed the Iranian Defense Ministry’s Organization of Defensive Innovation and Research (known by its acronym SPND), was targeted on Friday [27 Nov] in a multi-pronged attack involving at least one explosion and small fire by a number of assailants in Absard city of Damavand County, Tehran Province.

New York Times quoted intelligence officials as saying that Israel regime was behind the assassination of Iranian scientist Mohsen Fakhrizadeh.

“One American official — along with two other intelligence officials — said that Israel was behind the attack on the scientist,” New York Times reported, adding, “It was unclear how much the United States may have known about the operation in advance, but the two nations are the closest of allies and have long shared intelligence regarding Iran.”

The assassination of Iranian scientist Fakhrizadeh provoked many reactions in the region and the world but in the meantime, the silence of many human rights defenders in not condemning this assassination is debatable.

In this regard, the Iranian Foreign Minister had condemned the assassination of Mohsen Fakhrizadeh and called on the international community not to remain silent in the face of this terrorist act and to abandon double standards and condemn the act of state-sponsored assassination.

To know more about the issue, we reached out to Richard Anderson Falk, American professor emeritus of international law at Princeton University. Following is the text of our interview with him

Isn’t the assassination of the Iranian scientist against international law and norms?

Fakhrizadeh’s assassination cannot be legally & politically justified by any acceptable theory governing the use of force in international relations and has very negative implications as an international precedent. Yes, it is a targeted use of international force against someone outside the combat zone that cannot be justified by a valid claim of self-defense, which by the UN Charter, requires a prior armed attack, or at least a well-documented threat of the imminence of such an attack. This assassination of a nuclear scientist amounts to an unlawful ‘extra-judicial execution,’ which the UN Human Rights Council has unconditionally condemned on several occasion.

In the case of Afghanistan and its so-called ‘War on Terror,’ the US justified drone assassinations in various parts of the world either by an anti-terrorist rationale or by the contention that a hot battlefield has been extended to foreign countries if linked to a particular terrorist organization. Israel has resorted to extra-territorial assassinations since its inception despite frequent condemnations, as well as provocative assassinations in Occupied Palestine since 1967.

The assassination of Mohsen Fakhrizadeh cannot be legally, morally, or politically justified by any acceptable rationale, and has very negative implications as an international precedent.

Many believe the terrorist act has been committed by the Israeli regime. What do you think of this?

I find all forms of state terrorism to be unlawful, amounting to international crimes, and morally indefensible, especially aggravated when directed at civilians inhabiting countries which are at peace with one another, even if relations are strained by unresolved disputes.

Can such an act by the Israeli regime be done without coordination with Trump?

As such coordination is rarely acknowledged, we can only surmise that it occurs, and has been confirmed in the past, including in relation to Iran’s nuclear program. Given the timing of Pompeo’s visit to Israel prior to the assassination and after Trump was defeated in the U.S. presidential elections in November constitutes strong circumstantial evidence of knowledge before the event, if not active coordination. Israel’s failure to make any effort to deny their role in the assassination is also relevant.

Why have the terrors been focused on Iranian nuclear and defensive elites?

Israel, US, and likely Saudi Arabia have been carrying on an unlawful destabilization campaign against Iran for many years, which has intensified during the Trump presidency. Such a focus corresponds with Israel’s security narrative, which seems to have been unconditionally accepted in Washington during the Trump presidency. It alleges that Israel’s longer-range security is threatened by Iran’s nuclear program, which it further alleges seeks to gain a capability to develop produce nuclear weapons, a concern that is reinforced by claims that its immediate security is currently jeopardized by Iran’s large arsenal of sophisticated precision-guided missiles. Israel may feel emboldened by both Trump support and likely departure from the American presidency on January 20th, and further by the recent normalization agreements with the UAE and Bahrain.

What can be the consequences of such a criminal irresponsible act?

There are other uncertainties. (1) will Trump/Netanyahu seek to provoke Iran by further aggressive actions in the interim before the Biden inauguration? (2) will Biden follow the Obama path toward diplomacy or be more guided by a policy that strikes a compromise between Obama’s and Trump’s approach? Such a compromise would extend the 2015 arrangement to cover non-nuclear regional security issues affecting Yemen, Gaza, and Lebanon, and possibly Syria, as well as possiby missile deployments. (3) do the normalization agreements between Israel and several Arab governments create a new regional situation that is different than what existed pre-Trump?

What are the goals behind the act considering the timing?

As the act itself has not been officially acknowledged, commentary on its goals is necessarily speculative. The most reasonable interpretation of goals is to provoke Iran so as to give Israel a pretext for retaliation and possibly draw the US into a combat role, and if this fails, to make a diplomatic accommodation with the Biden presidency more problematic for both sides.

Why haven’t European countries condemned the act strongly and somehow they have kept silent?

Richard Falk is a member of the TRANSCEND Network, an international relations scholar, professor emeritus of international law at Princeton University, Distinguished Research Fellow, Orfalea Center of Global Studies, UCSB, author, co-author or editor of 60 books, and a speaker and activist on world affairs.