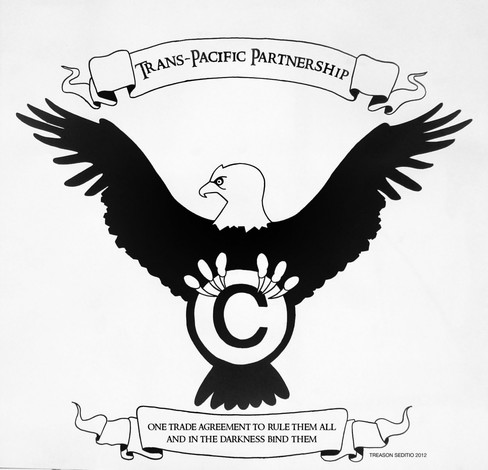 By Kevin Zeese and Margaret Flowers

The White House is calling January “TPA (Trade Promotion Authority) Month” and has made it their task to pass Fast Track. President Obama needs Fast Track to pass the Trans-Pacific Partnership (TPP). When Congress returned this month, a bill was quickly introduced after delays of more than a year.

The lies begin with title of the bill: “The Bipartisan Congressional Trade Priorities Act of 2014.” Bi-partisan?  In the House there was only one sponsor, Republican David Camp (MI).  The Republicans demanded the Democrats add a sponsor before it was introduced, but due to public pressure, they could not find one.

The only Democrat on the bill in the Senate is Max Baucus (MT) — the senator who gave us the Bush tax cuts for the wealthy and who is leaving the senate to become Ambassador to China.  So, the bill is only bi-partisan until he heads off to his new job.

After four years of secret negotiations with more than 600 corporate advisers, the once seemingly invincible largest trade bill in history, covering 40% of the world’s economy , looks very much like it can be defeated.

Why is the TPP looking like it can be stopped?  One reason is its secrecy.

Leaks are sinking the TPP like the Titanic on its way to the bottom of the ocean. Ron Kirk, the former US Trade Rep said they were keeping it secret because the more people knew, the less they would like the TPP and it would become so unpopular it could never become law.

Each leak has proven him right.

This week, Wikileaks published the Environmental Chapter.  The bottom line – there is no enforcement to protect the environment. The TPP is worse than President George W. Bush’s trade deals.  Mainstream environmental groups are saying the TPP is unacceptable.

Similarly, the leak of the Intellectual Property Chapter revealed that it created a path to patent everything imaginable, including plants and animals, to turn everything into a commodity for profit. The Obama administration was pushing it way beyond normal intellectual property law in order to increase profits for everything from pharmaceuticals to text books.

The refrain is always the same: profits come first.  The necessities of the people and protection of the planet come last.

Backlash in Congress to Fast Track

Baucus announced last March that he would deliver Fast Track by June. Pressure delayed it so that now the bill is being introduced in the beginning of an election year. Election years are a terrible time to pass anything controversial.

The TPP is becoming politically toxic. Over the last year there has been a steady stream of emails and phone calls to Congress. Members have faced constituent meetings and protests where TPP is being raised. Some examples of protests: Los Angeles, Seattle,Washington, DC, Salt Lake City,Minneapolis, US Trade Rep Office, Vancouver,  Leesburg, New York City . . . we could go on. Americans have sent a clear message to members of Congress that they better not be associated with the TPP in an election year.

Five members of the Senate Finance Committee told US Trade Representative Mike Froman they will not support the Baucus Fast Track bill because Congress needs to be involved throughout the process not just in an up or down vote after it is completed.

During a hearing on Fast Track on Thursday protesters were there expressing their displeasure.

Baucus says he will not be holding a mark-up of the bill because of the divisions on the Finance Committee. Sen Ron Wyden (D-OR) who will be taking Baucus’ place told Politico there was “broad frustration” with the lack of transparency. . Majority Leader Reid has put fast track on a slow track in the senate saying he does not plan to bring it to the Senate Floor, saying there was too much controversy around it.

As bad as the Senate sounds for the administration, the House is even worse. Opposition has been building in recent months with Democrats and Republicans writing President Obama opposing Fast Track.

They could not find a Democratic co-sponsor and now Politico reports that Speaker Boehner says he will not bring the bill to the floor for a vote unless 50 Democrats support it.

State of the Union: Last Stand for Fast Track of TPP?

The president’s TPA month is off to a bad start, so he has to make a big pitch in his upcoming State of the Union on January 28.  If he doesn’t, it is a sign he has given up and is distancing himself from defeat. He’s not only going to have to persuade almost every Republican to support him (that would be a first for his presidency), he’s going to have to convince every Democrat who has not taken a position, and change the minds of many who have already publicly said they oppose Fast Track.

The problem is Members of Congress know that if they get on the wrong side of corporate trade agreements, it will hurt them politically. The public is angry about this job-killing trade deal, even Minority Leader Pelosi has had her events interrupted by TPP protesters. In fact, an event in Los Angeles with President Obama, Nancy Pelosi and Harry Reid had hundreds of TPP protesters. The social movement against corporate trade is coming across loud and clear leading top House Dems to describe it as “dead on arrival” if it does not protect labor and the environment. We know from the Environment Chapter, it does not protect the environment.  Major unions oppose the TPP because it is evident, like all corporate trade, it will be a bad deal for labor since a major goal is lower wages.

The views of many in Congress were summarized in a statement by Democratic Reps. George Miller (CA), Louise Slaughter (NY) and Rosa DeLauro (CT): “Our constituents did not send us to Washington to ship their jobs overseas, and Congress will not be a rubber stamp for another flawed trade deal that will hang the middle class out to dry.”

Members of Congress have seen the research that shows 90% of Americans will see their income go down from the TPP while the wealthiest get wealthier. Why would any Member of Congress want to sign on to something like that – especially in an election year?

Congress should oppose Fast Track because it is an Obama power grab. Under the Baucus-Camp bill the Congress will have 90 days to review the agreement. The House will have 60 days and the Senate will have an additional 30 days. The count begins when the White House decides the negotiations have been completed.

Under the Baucus-Camp Fast Track the president is also able to draft extensive implementing legislation to bring US law into compliance with the agreement. It is up to the president to decide what changes in laws or new laws are needed to comply with the TPP. Congress is not able to mark-up or amend the language of these bills.  And, these can be very significant laws.  For example, provisions like “Buy American” or “Buy Local” can be repealed as a restraint on trade. In all of these cases under Fast Track the president becomes the Congress and drafts legislation, totally destroying the checks and balances of the three branches of government.

As some anti-TPP activists in Los Angeles showed in a great street theater action in front of the offices of Rep. Xavier Becerra (D-CA), Fast Track makes Congress unnecessary. They brought the “TPP movers” to his office and outsourced him.  It is important for activists to know what is in Fast Track because the US Trade Representative has been doing its best to mislead the public.

Time to Finish the Job, Make Fast Track for the TPP Politically Toxic

The movement against the TPP has come a long way in the last year from challenging a trade agreement that no one knew about and looked like it could not be stopped; to a trade agreement widely known about in activist circles and which is becoming too toxic for elected officials to be associated with in an election year.

The reason we have come this far is because the TPP affects so many aspects of every person’s lives – food, the environment, workplaces, the Internet, banking and finance, job availability, health care, energy, the list goes on and on.  As people learn about the TPP and what it does they oppose it. While lame ducks like Obama and Baucus who do not have to seek re-election can ignore angry constituents and follow the demands of big money, those seeking re-election do not have that luxury.

Our task: We need to continue to build opposition and show elected officials they do not want to be associated with these toxic trade agreements. They need to understand that fast-tracking the TPP could end their career.

A lot is already planned. To stay informed“like” the Flush The TPP Facebook page and follow the twitter feed where we will be regularly publishing new sharable memes to continue to build the stop the TPP movement. If more TPP leaks come out, we’ll provide immediate analysis. If there are hearings we will organize protests to make sure the voices of opposition are heard and share that information.

Every Tuesday there is a TPP twitter storm at 9 PM Eastern.  Follow the hashtag #TPPMediaMarch to participate. There will be a special TPP storm during the State of the Union on January 28.

Scores of organizations have come together in a movement of movements to create a webpage StopFastTrack.org.  We’ve planned ten key days of pressure on Congress from January 22 to January 31.  During this period, people will be making phone calls to Congress through the website which will provide simple tools to call Congress.  In addition, during this period, people are organizing for the State of the Union on January 28 and an Inter-Continental Day of Action on January 31.

During the State of the Union, people opposed to the TPP plan to stand vigil outside of the Congress beginning at 8:30 PM so they can be there when the president arrives for the speech that begins at 9 PM.  During the speech a special State Of The Union TwitterStorm will be held from 9-10pm EST, follow #TPPMediaMarch to participate.

On January 31 there will be an Inter-Continental Day of Action against the TPP & Corporate Globalization.  The theme is ‘No More NAFTA’s as this month is the twenty-year anniversary of NAFTA, which has had devastating consequences for working families, small farmers, indigenous peoples, small business and the environment in all three countries and beyond. The TPP is fairly described as “NAFTA on Steroids.”

We have come an incredible distance and the likelihood of stopping the TPP is stronger than it ever has been.The president and transnational corporations will make an aggressive push to pass Fast Track this month.  It is our job to stop them and make it impossible to bring Fast Track or the TPP up again.  We can accomplish this and when we do it will be a tremendous victory of the people over transnational corporate power!

Sign up for the daily news digest of Popular Resistance, here.

Kevin Zeese, JD and Margaret Flowers, MD are participants in PopularResistance.org; they co-direct It’s Our Economy and co-host Clearing the FOG. Their twitters are @KBZeese and MFlowers8.