The Good, The Bad, And The Ugly In Syria Talks 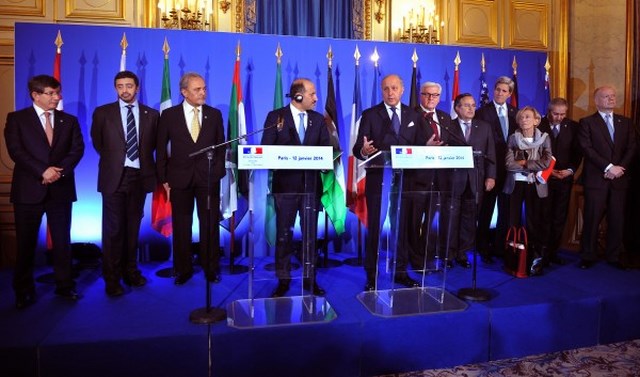 A five-minute audio message by al-Qaeda leader Ayman al-Zawahri went viral on the internet in which he enjoins the rebels in Syria to end their infighting and focus their energies on battling against President Bashar al-Assad’s forces.

A veritable testimony to the fact that the militants fighting against Bashar al-Assad are affiliated to the terrorist al-Qaeda and as a result, they are stripped of any cloak of legitimacy, it further reinforces the notion that there is more than meets the eye in Syria.

Interestingly, the warring factions decided to patch up their differences and sit down at the negotiating table once they heard their leader’s bezels of wisdom.

The negotiations started on Wednesday in an ambience charged with vitriol and spite. While Syrian Foreign Minister Walid al-Moallem was trying to clarify the real situation in Syria and give a “Syrian version of facts,” UN Secretary General Ban Ki-moon interrupted him and tried to deny him the chance to continue with his speech.

The western media say that he had exceeded his time and that he should not have clashed with the UN head but the fact is that they had gathered together to resolve a Syrian crisis which has been largely engineered by the West and the al-Qaeda elements. In other words, they were there to resolve a West-fomented crisis and the Syrian foreign minister was utterly entitled to finish his speech.

Ban: Can you just wrap up please.

Moallem: I came here after 12 hours in the airplane. I have few more minutes to end my speech. This is Syria.

Ban: How much do you have left now?

Ban: No, no. I will give you another opportunity to speak.

Moallem: No, I cannot divide my speech. I must continue … I will do my best to be fast.

Ban: Can you just wrap up in one or two minutes?

Moallem: No, I can’t promise you, I must finish my speech. … You live in New York, I live in Syria. I have the right to give the Syrian version here in this forum. After three years of suffering, this is my right.

Ban: We have to have some constructive and harmonious dialogue, please refrain from inflammatory rhetoric.

Moallem: It is constructive, I promise you, let me finish.

Ban: Within 2-3 minutes please. I will give you another opportunity.

Moallem: You spoke for 25 minutes, at least I need to speak 30 minutes.

The talks do not seem to yield any fruits as there is a substantial gap between what the government of Bashar al-Assad demands and what the Syrian National Coalition (SNC) and its Western allies want. The opposition group insists that President Bashar al-Assad must relinquish power and that a transitional government be formed in Syria.

On the other hand, Damascus says that Assad will leave office only if he is voted out of office. That is, free elections will be held in the country and people will determine their own fate. Damascus also says the coalition does not represent the Syrian opposition.

As Syrian Foreign Minister Walid al-Moallem told the audience in Montreux, Switzerland, “No one in the world has the right to confer or withdraw the legitimacy of a president, a constitution or a law, except for the Syrians themselves.”

However, the idea of Assad staying in power was tossed away when Syrian opposition leader Ahmad al-Jarba said the “rebels will never accept a negotiated settlement that keeps Assad in power”, and he suggested that “further talks are pointless if the regime rejects the premise of a transition government.”

In a threatening voice he said, “Time is like a sword. And for the Syrian people, time is now blood.” The simile that ‘time is like a sword’ is sort of awkward and absurd. But once we think of the crimes committed on a daily basis by the a-Qaeda elements in Syria, the simile becomes grotesquely impregnated.

To make matters worse, the SNC sources said on Friday they will not hold direct talks with the Syrian delegation headed by Foreign Minister Walid al-Moallem unless Damascus endorses the Geneva I communiqué, which was signed in 2012 and calls for a transitional government.

These are indeed strange times. A country is brazenly invaded and the invaders and those who support the invasion seek to determine the fate of the nation.

Crisis is crippling the country and a solution should be carved out to best serve the interests of the Syrian people. One reasonable solution was brought up by Iranian President Hassan Rouhani at the World Economic Forum in Davos when he called for a new election in Syria, saying Iran would respect the results.

“The best solution is to organize a free and fair election in Syria. And once the ballots are cast, we should all accept the outcome. Decision-making is for the Syrian people to do and they are the ones who should determine their own future, and in doing so, the first condition is that bloodshed be stopped and certain countries give up supporting terrorism,” the Iranian president added.

To put it succinctly, the only workable roadmap for Syria to exit crisis is to be engineered in evicting the al-Qaeda militants generously funded by Saudi Arabia and Qatar and in holding democratic national elections.

Dr. Ismail Salami is an Iranian writer, Middle East expert, Iranologist and lexicographer. He writes extensively on the US and Middle East issues and his articles have been translated into a number of languages.