To Snap Every Yoke: World Law to End Slavery in Libya 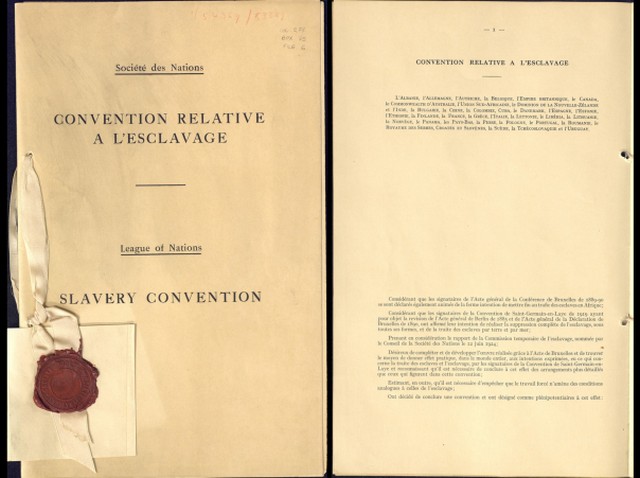 “Is not this what I require of you… to snap every yoke and set free those who have been crushed?” Isaiah, 58 v 6

There are many ways that an individual can be held in chains through his desires and emotions. These chains need to be broken by the development of the will and strong efforts of self-realization through mediation and therapy.

However, it is contemporary forms of slavery in its literal and not symbolic sense that must concern us today. The League of Nations on September 25, 1926 facilitated a Convention on Slavery which was a high-water mark in the world-wide consensus on the need to abolish slavery begun some 100 years before by small groups of anti-slavery activists in England, France and the USA. However as with many League of Nations conventions, there were no mechanisms written into the convention for monitoring, investigation and enforcement. Although the Slavery Convention outlawed slavery and associated practices, it not only failed to establish procedures for reviewing the incidences of slavery in States parties, but also neglected to create an international body which could evaluate and pursue allegations of violations.

Within the United Nations system, there have been advances made, especially in investigation both making public through official U.N. documents the investigations of non-governmental organizations (NGOs) and through the work of Special Rapporteurs of U.N. human rights bodies.

Thus in a U.N. report on “Trafficking of Children and Prostitution in India” the authors write “Nepal appears to be the most significant, identifiable source of child prostitution for Indian brothels.  Thousands of Nepalese females under the age of 20 have been identified in India by various studies.  The average  age of the Nepalese girl entering an Indian brothel is said to be 10-14 years, some 5,000-7,000 of them being trafficked between Nepal and India annually.”

As Professor Vitit Muntarbhorn, a former U.N. Special Rapporteur on the Sale of Children has written “Gender discrimination victimizes the girl child.  Precisely because the girl child in seen in some communities as having lower priority, she is often denied access to such basic necessities as education which could ultimately protect her from exploitation.  Another disquieting form of discrimination is based upon race and social origin, interwoven with issues of class and caste.  It has become increasingly obvious that many children used in labor and sexual exploitation are lured from particular racial or social groups such as hill tribes, rather than the well-endowed groups in power.”

Today, it is the fate of migrants blocked in Libya, forced into forms of slavery one thought had disappeared, which rightly has focused U.N. and NGO concern. The U.N. High Commissioner for Human Rights, Prince Zeid Raad Al Hussein, has said that “the suffering of migrants detained in Libya is an outrage to the conscience of humanity.”  His evaluation is based in part on the in-depth field investigation of U.N. teams which have highlighted that the majority of the 34 detention centers in Libya are concentration camps in which abuse, torture, forced work and all sorts of violence are everyday occurrences.  Smugglers of people are often free to do as they please with the complicity of police officials at all levels.  The risk of women being captured and raped is so high that some women and girls who are often fleeing from conflict conditions in their home countries take massage doses of birth control pills before entering Libya so that they can avoid getting pregnant.  However, this can often cause irreversible injuries.

There have been reports and filming of “slave auctions” especially in Sabba, the capital of the Fezzan province where routes from Sudan, Chad, and Niger meet and where roads leading north to the Mediterranean start. The U.N. also has reports from NGOs, especially humanitarian organizations, and from investigators of the International Criminal Court.

The issue which faces us now is what can be done. The League of Nations and the U.N. anti-slavery conventions are based on the idea that a State has a government. Unfortunately, Libya is a “failed State”.  It has two rival governments, a host of armed groups, and more-or-less independent tribes.

The Association of World Citizens has proposed that there could be created a Libyan confederation with a good deal of regional autonomy but with a central government which would be responsible for living up to international treaties and U.N. standards.  For the moment there has been no progress in that direction or in the direction of any other constitutional system.

Slavery is a consequence of disorder.  Without a minimum of legal structure, there will always be those who arise to make short-term gains including by the selling of people.  The conscience of humanity of which the High Commissioner for Human Rights spoke must now speak out boldly to break the yoke of slavery.  NGOs need to take a lead. Governments are likely to follow.