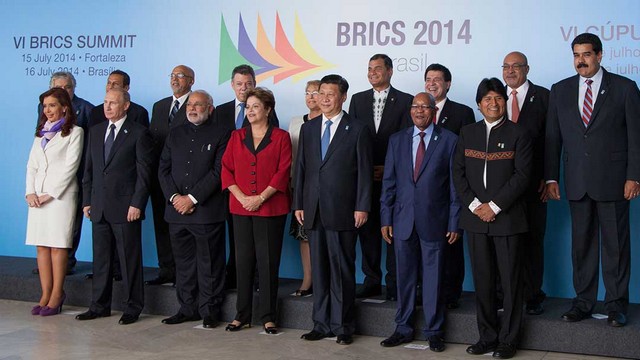 This declaration in PDF format for printing

In today’s nuclear age, the consequence of a geopolitical policy of confrontation with Russia and China can only be the thermonuclear extinction of the human race. Therefore, every effort must be made to cooperate to solve the multiple crises facing humanity.

The BRICS nations (Brazil, Russia, India, China and South Africa) have united to pursue a policy of economic development not just for their individual countries, but for the benefit of the people of all nations. To that end, they have created a New Development Bank to invest billions in necessary development projects.

China recently initiated the Asian Infrastructure Investment Bank (AIIB), joined by over 20 Asian nations as founding members, and has set up a Silk Road Development Fund.

At the APEC conference in Beijing, Chinese President Xi Jinping invited President Obama to join the efforts of China and other Asian nations, including Russia, in the development of the New Silk Road.

These initiatives are not geopolitical in nature. Contrary to the Transpacific Partnership (TPP) advocated by Obama, which excludes Russia and China, the BRICS-related initiatives including the Chinese proposed Free Trade Area of the Asian Pacific FTAAP) are inclusive. They are based on the concept expressed by the late Pope Paul VI that the “new name of peace is development.” Thus, in Australia at the recent G-20 meeting both Xi Jinping and Indian Prime Minister Modi spoke of the twin goals of achieving global peace and ending poverty through economic development.

There is no problem in the world that cannot be solved by such an approach and conversely no problem that will be solved without it.

Such cooperation between the U.S., Russia, China and India, among other nations, is necessary to defeat the Ebola pandemic in Africa.

The terrorist threat represented by ISIS and Al-Qaeda is aimed equally at Russia, China and India as well as the U.S. and Europe. It can only be defeated through a new security architecture based on cooperation.

The policy of conducting “color revolutions” under the pretext of democracy represents a policy of war, even if that term is not used, because its aim is to topple governments with the aid of foreign money. It has to stop. The campaign to impose sanctions on Russia for its opposition to such “color revolutions” and to a Nazi coup in Ukraine is only exacerbating the global crisis. An approach based on mutual cooperation to achieve the common ends of mankind throughout Eurasia and beyond would instead create the basis for global peace.

While the U.S. has abandoned the Kennedy space program, the Chinese are committed to a lunar program focused on the exploitation of helium-3 for the purpose of generating unlimited fusion energy. With collaboration between the U.S., Europe, Russia, China and India, among other nations, man could finally realize Johannes Kepler’s vision of mastery of the laws of the solar system for the benefit of man.

Only such an approach would restore the United States and Europe to their original purpose as expressed in the European Renaissance and the American Revolution, a purpose which the U.S. and Europe have increasingly abandoned and the rest of the world has now adopted and is now urging them to readopt.

We therefore call upon the U.S. and Europe to abandon the suicidal geopolitical policies of the past which led to the two previous World Wars and are leading to a third and to build a future for all humanity by readopting the principle of the Treaty of Westphalia by basing foreign policy on the principle of “the benefit of the other,” which ended the Thirty Years War in Europe, and on John Quincy Adams’ concept of a “community of principle among sovereign nation states.”

That is the only course coherent with the true nature of man as the only creative species. Any other course is based on a concept of man as an animal and leads to human extinction.

As patriots of our own nations, and as citizens of the world, we call on our fellow citizens and the leaders of our nations to have the courage to break the current cycle of escalating bestiality by accepting the generous offer to collaborate with the BRICS.

(In signing this statement, I authorize my name to be appear in its publication.)

PrevPreviousMESSAGE OF SOLIDARITY IN CONJUNCTION WITH WORLD WEEK FOR PEACE IN PALESTINE AND ISRAEL
NextSTOP TORTURE: ACCOUNTABILITY: YES – IMPUNITY: NONext