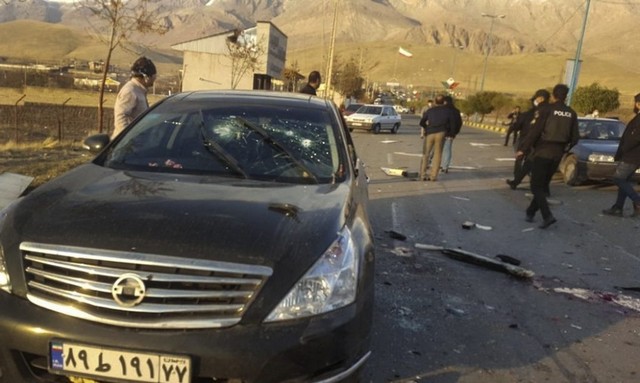 Brigadier General Mohsen Fakhrizadeh of Iran’s Islamic Revolutionary Guard Command (IRGC) and Iran’s most important nuclear scientist was assassinated not too far from Tehran recently. Iran immediately accused Israel , an allegation confirmed by a senior Washington official soon after. Meanwhile Tel Aviv has remained silent. Given its many earlier assasinations of Iran’s nuclear scientists and Netanyahu’s specific mention of Fakhrizadeh in 2018 the assumption is a safe one.

This year saw the murder of two prominent Iranian leaders. Very early in the year President Trump of the USA ordered the murder of Qasem Solaimani, a Major General of the IRGC and commander of the Quds Force, one agreed by all as formidable. He was on a diplomatic mission. In both instances Tehran vowed revenge but as time has shown prudence has been the watchword. The reported early warning bombing of the US Iraqi base, Ayn Al-Asad was intended to avoid deaths of US servicemen and women. Clearly the intention was to avoid a counter attack and prevent the outbreak of war.

The loss of Fakhrizadeh while great is not expected to paralyse Iran’s nuclear programme. It is only natural that the personnel pool in the area has grown over the years to meet the needs of Iran’s nuclear energy industry. Iran has denied that there was ever any effort to build a nuclear weapons programme, a stand very much part of its Islamic tenets. But Israel uses the nuclear weapons argument as a convenient strategy of undermining the Iranian effort to build its strength: economic and defence. Israel is fighting to maintain the uneven playing field of West Asia (Middle East) where it is the sole nuclear power but undeclared.

If then the Fakhrizadeh murder will not hamper Iran’s ability to build its nuclear energy industry, which for its own convenience Israel assumes will be flipped and weaponised, then why commit the crime? Observers argue that the intention is to tie President-elect Biden’s hands in the event he tries to resurrect US participation in the Joint Comprehensive Plan Of Action (JCPOA) or the Iran Deal making war the necessary option. The assumption is that the murders would inhibit Iran’s ability to return to the Iran Nuclear Deal. While plausible, this fails to recognise the pragmatism that has informed Tehran’s decisions thus far.

Indeed, most are convinced that vengeance will not bring about the declaration of war by Tehran. And yet, the failure to secure Fakhrizadeh’s safety is an embarrassment for Tehran.

The realization of justice is a much cherished principle of Shia Islam: “Everyday is Ashura. Every land is Karbala”, the former the day of Imam Hussain’s (Prophet Mohammad’s grandson) martyrdom, the latter where he was martyred in his fight for justice. The Islamic Republic of Iran has been at the receiving end of much injustice for defending its sovereignty and resisting the hegemonic proclivities of the USA. The 8 year Iran – Iraq war was nothing but a war where Iraq played proxy for the USA. The on-going debilitating American sanctions, including its refusal to lift those on medical supplies despite the Covid-19 pandemic have caused civilian casualties and deaths, intentionally targeted to trigger an uprising among the Iranian people against the government.

The pursuit of justice is the core of Shi’ite belief. When this informs the dynamics that drives awareness of the Iranian people then the country’s enemy is obvious: external forces. Obviously, too, the government is very mindful of Islamic tenets as is seen in their attitude towards nuclear weapons. Was this the rationale for not killing US troops when Iran’s missile attacked US bases in Iraq? Was this why they shot down the unmanned drone (UAV) and spared the manned US spy plane. If the answer is yes then revenge for the murders of Fakhrizadeh and Soleimani will not be a conventional hot war.

In a time when wars are fought by the weaponising of any means that can destroy society and economies, what can Iran weaponise to undermine Israel? In the case of Soleimani the shape of that justice can be surmised from Trump’s admission of murder. But the Fakhrizadeh murder?

The glean of a possible answer could be at hand. On December 17th, 2020 a news story in the Haaretz begins with “Israel is in the midst of a massive cyber attack by an Iranian group…”
“.…Iranian -linked hackers have targeted at least 80 Israeli firms in what experts say is a form of ideologically driven cybercrime.” Apparently, this attack by the group Pay2Key, is the latest “in a string of cyber campaigns against Israel.” Israeli experts suggest this is a war against their economy. What leads the experts to this belief is that, unlike the average sophisticated cybercriminals, the ransom demanded is comparatively small — although a report in The Times of Israel said “no ransom” was demanded — probably because the objective is political rather than commercial.

If the report is accurate and a cyber war ensues, given the assumptions of the experts that the ‘hacktivists’ have been in place for a considerable time it is then safe to assume that a planned attack has long been in place. If war it is then it is safe to assume that the objective is economic paralysis hitting all of the economy as what Russia did to Ukraine in 2015. There cannot be half measures on the Iranian part if they are to avenge themselves effectively. Data stolen can be engineered to cause substantial paralysis of whatever the future target maybe, possibly Israel’s supply chain given the nature of the targets.

Cyber warfare fits well into the Islamic principles of the Iranian state. Tehran has taken every opportunity to demonstrate its scientific and technological skills but unwilling to exploit any of it needlessly. It is not a Third World country struggling to develop. It is a major military power of West Asia. It builds missiles, a prowess the US is trying to end. The late Fakhrizadeh has the distinction of being compared to Oppenheimer the father of the nuclear bomb. It is a civilisation of some five thousand years. Iran is feared for its potential, especially by the Arab states of Saudi Arabia and the Gulf monarchies.